From Dale – Please welcome today’s guest author Ellen Benefield to the pages of Lambchow for our next ABC of Faith.

Lydia’s bright smile, beautiful tan, and dark curling hair bewitched most people into underestimating her age by a decade or more. Lydia had made good money at an insurance company before she felt a surprising call on her life. She quit her job and moved to Mazatlán, Mexico to become a full-time missionary. That’s where I met her and was inspired by her walk of faith.

The missionary finance office required that Lydia spend long hours sorting through crumpled receipts and badgering other missionaries for long-forgotten spending reports. On her days off, instead of relaxing with a cool drink in the shade, she stomped through a long, sparsely populated peninsula. The area had been a leper colony a century ago. Cholera patients struck during a

horrendous outbreak were also boated out to this stretch of sandy beach to survive or die. Many decades later on “the Island”, as it’s referred to locally, per capita rates of mental disabilities are higher than the rest of the city.

Hidden in shacks with sand floors, the Island housed a few dozen unwanted children. These children were never registered with the government. Many had severe disabilities. Some didn’t know their own names. Sometimes the tiny creatures’ father and grandfather turned out to be the same person. These children didn’t exist on paper. Without a birth certificate, the children were ineligible for public school or public health services– a problem which Lydia tirelessly worked to correct. By the time Lydia moved away, every child living on the Island had a birth certificate.

These children had never had a birthday. So, for many years, on her own birthday, Lydia hosted a birthday party for them. She bought loads of cokes and quesadillas at a beachside restaurant where the kids could play in the surf while waiting for their cake and presents.

She cared for adults as well, particularly immobile or otherwise forgotten women. One woman could not speak. Lydia cheerily greeted her every week. She stayed for a while, calmly reading Bible stories at the woman’s side. Without words, the woman’s smile voiced her appreciation.

Lydia’s work on the Island, particularly her diligence and perseverance in searching out and advocating for forgotten people inspired me as a young missionary. She took her faith and put it in action without expecting any reward.

Galatians 3:11 (NLT) says “it is clear that no one can be made right with God by trying to keep the law. For the Scriptures say, ‘It is through faith that a righteous person has life.’” 2 Corinthians 5:7 (NLT) states “we live by believing and not by seeing.” Finally, Galatians 2:2 (NLT) says “My old self has been crucified with Christ. It is no longer I who live, but Christ lives in me. So I live in this earthly body by trusting in the Son of God, who loved me and gave himself for me.”

No one asked Lydia to fight for the unseen, forgotten people. She simply embodied the sacrifice that Jesus made for her. Lydia let herself become Jesus’ hands and feet. She felt His heartache for His precious children and found life in walking out her faith in a very practical way. She rejected her former way of life, with its focus on money and success, and humbled herself in a way that allowed her to have a radical impact on many lives.

Sometimes the walk of faith calls us to step out of the comfort surrounding us and into the unknown. Laws and rules have no power to rescue the forgotten. Jesus has that power. Faith calls followers to lay down our own plans and let Jesus call the shots. Lydia has since moved on to other adventures, but the misnamed peninsula carries evidence of her efforts in the shy smiles of a few overlooked children going to school for the first time. 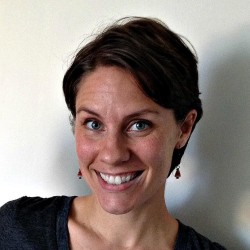 Ellen Benefield
Ellen spent most of a decade as a missionary in a low-income neighborhood in Mazatlan, Mexico. She currently pastors with her husband Kyle at Vineyard Church Peoria.

Add Lambchow to your RSS reader.